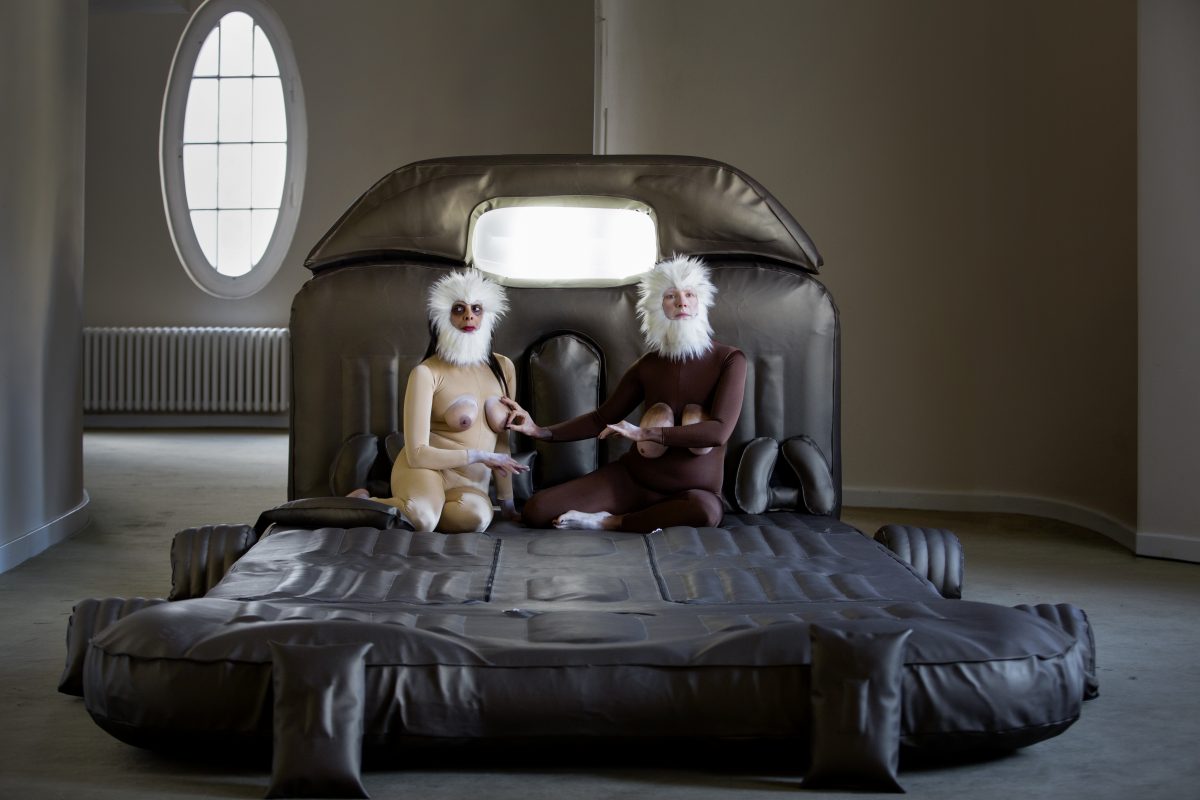 A project by Antonia Baehr and Latifa Laâbissi. In a visual installation by Nadia Lauro
Wednesday 9.9. 20:30, Studio 5
Registration

Monkeys and apes have a privileged relation to nature and culture for western people: simians occupy the border zones between those potent mythic poles. In the border zones, love and knowledge are richly ambiguous and productive of meanings (…).

Apes, at least great apes, are among the «almost human» animals. This «almost» has turned them into a surface onto which humans project their ideas of what it means to be human. At the beginning of the 20th century the chimpanzees Consul and Meshie lived among humans as humans and came to consider themselves human. Antonia Baehr and Latifa Laâbissi adopt their own apish identities – with no guarantee for historical accuracy. Hairy and morally free, insolent and shameless, these two human monkeys occupy Nadia Lauro’s visual installation, which is roughly and casually nested away from the stage in quiet little corners of theatres and museums. From two leather limousine seats, whose furry innards gradually spread into the room, Consul Baehr and Meshie Laâbissi exhibit themselves for 3 1/2 hours.

Antonia Baehr is a Berlin-based choreographer, performer, filmmaker and visual artist. Her pieces are characterized by a non-disciplinary way of working, examining the fiction of the everyday and the fiction of theatre.

Latifa Laâbissi is a dancer and choreographer. She brings multiple offstage perspectives to the stage, creating an anthropological landscape of stories, figures and voices. Dance «codes» are broken by unruly bodies, alternative stories, and montages of material marked by signs of the times.

Nadia Lauro is a visual artist and set designer who works in various contexts – scenic spaces, landscape architectures and museums. She designs stage sets, environments, and visual installations with compelling dramaturgical force, thus generating new ways of seeing and being together.

Mouth/nose protection is required when not seated.

Tickets are valid for entry to the Uferstudio grounds 6 pm – 10 pm via the entrance at Bad Strasse 41a, and for the opening event at 7.30 pm with the Gray Voice Ensemble in the Uferstudios courtyard.